Home News Looking to the future with climate projections

Looking to the future with climate projections

Humanity is facing a global change the likes of which has not been seen before. Climate change will affect almost every aspect of the day-to-day lives of every organism on the planet, it will change our weather, our oceans, our water supply, our food, and our health.

With decades of climate change science to draw on, researchers are clear about the broader changes that are likely to occur, such as rising temperatures, changing rainfall patterns and rising sea level. However, information at a finer scale—regional climate projections—is critical for planning for the future. These projections can be combined with working knowledge of different sectors to manage climate risk and make informed decisions.

“For example, if you’re building a massive new infrastructure project right near the coast, then a risk assessment accounting for plausible scenarios of sea-level rise this century will help decide whether it is best to accommodate sea level change, protect for it, or else retreat to higher ground,” explains Dr Michael Grose, a climate scientist at CSIRO.

Climate projections provide important information to help make these decisions, but projecting what the climate is likely to look like in 10 or 100 years is a little different to predicting tomorrow’s weather.

Looking into the future

Weather forecasting models, run on powerful computers, use the laws of physics to simulate the movement of the atmosphere and oceans, and so predict the behaviour of weather systems. But, as anyone who has ever tried to organise a picnic will know, predicting the weather even a week in advance is not a perfect science.

How then can we project the climate over coming decades and centuries with any ability?

Climate is the average weather. As Mark Twain said, “climate is what you expect, weather is what you get”. For example, we don’t know what the weather will be like in Melbourne on 25 December next year, but we expect that December will be warmer than June.

“We collect the consistent findings from the model simulations and our physical understanding of the climate, then organise them into projections of plausible future climate scenarios,” Dr Grose explains.

A range of possibilities

Projections show the range of climate change we can expect from ongoing greenhouse gas emissions. However, the future emissions are not yet set in stone.

In fact, the biggest rogue element in developing climate projections is us: humans —or more specifically, how much greenhouse gas we are going to produce in the near future.

This means any predictions about our future climate are given in the context of what emissions scenarios might unfold. Instead of a single prediction about what the future will be like, scientists like Dr Grose and colleagues present results for a range of possible scenarios that are conditional on how we as a species act on our greenhouse gas emissions.

“Having a range of futures may sound like a weakness because it seems there’s a lot of uncertainty, but it’s actually a real strength because it shows how different actions now can change the future.”

Developing projections that equip decision-makers with the ability to make a more informed choice about what risks they are willing to take is about more than just running computer models.

“It’s about using the best science we can to make regional projections, developing products and services that meet the needs of different stakeholders, and then developing action plans that inform decision-making. This involves science but also communication: understanding how the climate impacts our society, and how people make decisions are important components of developing projections,” says Dr Grose.

“It’s where the knowledge about what is possible in the future, in terms of the climate, comes together with what people value and how they make decisions.”

So how confident are scientists in their projections about climate changes that might take place 20-80 years from now?

Dr Grose says the estimates about how much global average temperatures will change in response to a given increase in greenhouse gas are still fairly wide, e.g. 0.3°C to 1.7°C warmer for a low emission scenario and 2.6°C to 4.8°C warmer for a high emission scenario. However, some things are virtually certain: it will get hotter, sea level will rise and there will be changes in rainfall patterns. 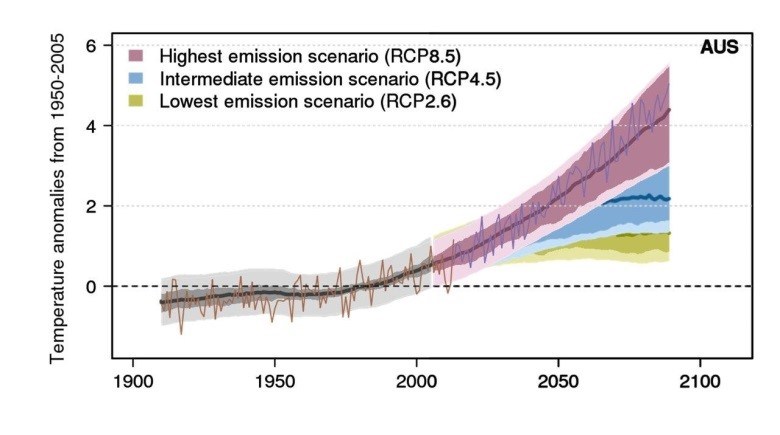 Australian mean annual surface warming relative to the 1950–2005 average in the past and for three future emissions pathways. The brown line is Bureau of Meteorology observations and the purple line is a simulation from Australia’s community climate model (ACCESS).

“As time goes on and we get more observations, improved understanding and improvements in modelling, we should be able to narrow the range of results down a little bit more,” he says.

The models are also constantly being improved; for example, in the modelling of cloud formation, ocean eddies, and atmospheric processes over mountains.

These climate models not only give us the chance to understand how the climate may change, but show that we need to do two things to manage the potential impacts: (i) reduce greenhouse gas emissions to slow climate change, and (ii) build resilience to deal with some level of unavoidable climate change.

“That’s a big goal behind making climate projections; to motivate action. But another big goal is to help work out what the range of possible change is for all plausible scenarios so we can manage and adapt in time.”

Michael Grose is a researcher in Project 2.6 Regional climate projections science, information and services and Project 2.2 Enhancing Australia’s capacity to manage climate variability and climate extremes in a changing climate.

This article was originally published on ECOS on 6 September 2016. Read the original article.

Looking to the future with climate projections was last modified: October 27th, 2016 by Karen Pearce