Marine heatwaves are extreme warming events which occur in the ocean. They can have devastating and long-term impacts on Australia’s coastal ecosystems, economy and communities, including industries such as fisheries, aquaculture and tourism.

Earth Systems and Climate Change Hub researchers are working collaboratively with organisations such as the ARC Centre of Excellence for Climate Extremes and the Australian Institute of Marine Science to better understand how marine heatwave events in Australia and globally are changing, what is causing the changes and how these events impact marine ecosystems, industries and global biodiversity.

The frequency and duration of marine heatwaves has changed

In Australia, the Tasman Sea is widely recognised as a global warming hotspot, with sea surface temperatures east of Tasmania increasing at close to four times the global average rate. Tasmania’s eastern shelf is a region of critical benthic habitat biodiversity and an economically important region for wild harvest (including abalone and fisheries) and aquaculture (including Pacific oysters and Atlantic salmon). In the past four years, there have been two unprecedented marine heatwaves in the Tasman Sea region that far exceed all previous records. These events occurred over the summers of 2015/16 and 2017/18, with the events differing in their evolution, locations and ocean depth.

The 2015/16 Tasman Sea marine heatwave was experience deep into the ocean, extending from the surface to a depth of more than 400 meters. It lasted for more than 8 months and had significant impacts in the region, including the first recorded outbreaks of the Pacific Oyster Mortality Syndrome in the region. Other impacts from this event included mortality of abalone and reduced performance of farmed Atlantic salmon from local aquaculture.

The most recent marine heatwave event in the summer of 2017/18 in the Tasman Sea was relatively shallow, less than about 20 meters in depth, although much broader in areal extent. The event was more intense at the surface of the ocean compared to the 2015/16 event, with record high sea surface temperatures observed. 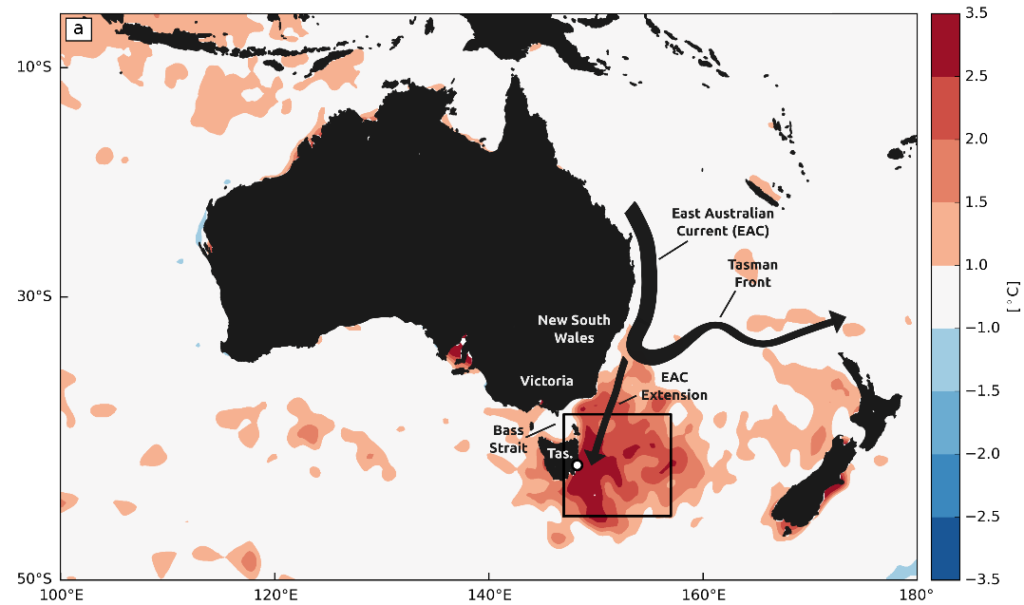 Research into the drivers of these two events found that for the 2015/16 heat wave, an event of this duration and intensity was significantly more likely to occur with the influence of human-caused climate change than without it.

Climate modelling of the 2017/18 event found that the record sea surface temperatures experience during this event were virtually impossible without anthropogenic influences, although natural variability (such as atmospheric blocking) was important in the formation of the event.

Climate projections show that marine heatwaves such as these are likely to increase in the future due to increasing greenhouse gas emissions caused by human activities.

Increasing trends in duration and intensity of marine heat waves events have implications for marine habitats and species and fisheries and aquaculture. Impacts may include increased coral bleaching, depleting kelp forest and sea grass, a poleward shift in some marine species and increased occurrence of diseases. The impacts of marine heatwaves usually persist long after the heatwave has concluded, often leaving ecosystems permanently changed.

The impacts caused by marine heatwaves have the potential to be better managed by coastal industries and ecosystem managers if reliable predictions of future events were available. To be able to do so, a better understanding of the drivers of these event and how to predict sea surface temperatures and their extremes is required. The Earth Systems and Climate Change Hub has been investigating and testing methodologies for predict future marine heatwaves using a robust statistical method to identify the climate drivers responsible for the high sea surface variability around Australia. This research is still on-going but preliminary results suggest there may be the potential to predict future marine heatwaves in the Tasman Sea region on a decadal scale, and in Western Australia at a shorter time scale.

With marine heatwaves across the globe expected to continue to increase in frequency and duration into the future, understanding why they occur and predicting when they may occur will provide important information for improved marine ecosystem and industry management in Australia.

This article is based on scientific publications produced under Project 2.3 -Towards an ACCESS decadal prediction system.