Australian average temperatures are projected to continue increasing over the next several decades due to increasing greenhouse gases, leading to more heat waves and new high temperature records.

A common question we hear at the Hub when record-breaking events, like extreme temperatures, are reported, is “what role did climate change play in this event, and what was the role of natural variability?”

For the spring temperatures, there was substantial year-to-year and decadal variability from 1910 to 1960, but no long-term warming trend. 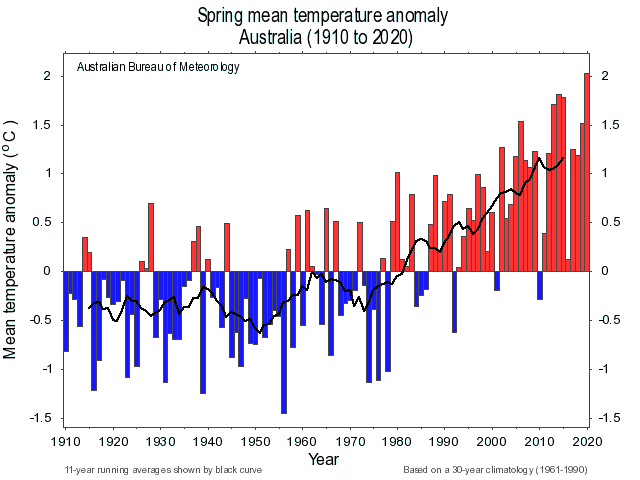 Spring mean temperature departure across Australia each year, relative to the 1961-90 average, with black line showing the 11-year average (from the Bureau of Meteorology).

How do researchers assess the causes of record temperatures?

The first set simulates historical climate variations over the whole globe from 1900 to the present with all the different forcing factors: both natural factors and increases in greenhouse gas concentration in the atmosphere due to human activity. The second set uses the same climate models, but now only with natural climate variations and fixed pre-industrial greenhouse gas concentrations.

This type of analysis was undertaken by Dr Sophie Lewis and Dr David Karoly (now the Hub Leader) in 2014 to look at the record spring temperature that was observed in 2013. It showed that human-caused climate change was a major contributor to the new record temperature then.

The probability distributions of spring Australia temperatures (relative to 1911-40) from observations for 1911-2005 and different sets of model simulations are shown in the Figure below. The distribution for the historical period 1911-2005 (11 models, 65 simulations) agrees well with the observations for the same period. Both are only slightly warmer than the distribution of spring temperatures from the simulations (36 historical, 13 Control) with natural forcings only, with no increases in greenhouse gases. However, the simulations for the later period 2006-2020 (35 simulations), with higher greenhouse gas concentrations like those observed, show substantially warmer spring temperatures and much better agreement with the observed 2013 record. 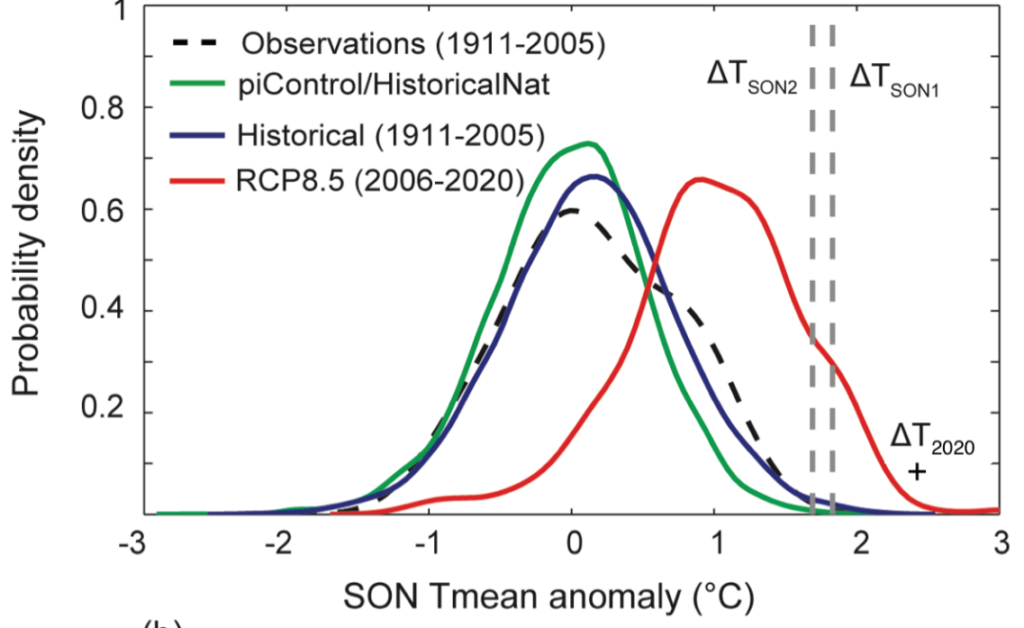 What caused the record spring temperatures in 2020?

In a follow-up study in 2014, Lewis and collaborators used the same approach to pre-calculate the chances of setting new record high temperatures for the whole of Australia and for each state for each season and for each month of the year (Lewis et al., 2014).

For the 2020 temperature records in spring and November, the table below gives the chances of setting a new record temperature using simulations for 2006-2020 with increasing greenhouse gases and natural variability, and the chances using simulations with natural variability alone (from Table 3 of Lewis et al., 2014). It shows that the record 2020 spring temperature across Australia would have been virtually impossible due to natural climate variations alone. Climate change due to increasing greenhouse gases has increased the chances of setting a new record by more than sixty times.

An extra column has been added to the original table, in which a normal distribution has been fitted to the observed temperatures for 1910-60, since these do not show any trend. The probabilities of setting the new record temperatures are estimated from observations alone and are even lower than using the climate model simulation data.

Both the observations and the climate model data show that the record 2020 spring temperature across Australia would have been virtually impossible without human-caused climate change.

Even more remarkable is that Australian temperatures in spring were affected by the current La Niña event. These events are normally associated with colder than normal temperatures across Australia, such as in 2010, which was the most recent strong La Niña event.

The global warming influence in spring due to higher greenhouse gases was able to overcome the cooling influence of La Niña. Climate change was the major contributor to the new record spring temperature, contributing about 1.5 °C to the observed anomaly of 2.4 °C.

What’s next in this field of research?

New techniques developed under the Hub (Wang et al. 2020) will provide information about how the recent increases in greenhouse gases interact with the atmospheric circulation, including the current La Niña event in 2020.