Home News Science update: What does the future hold for El Niño-Southern Oscillation and the Indian Ocean Dipole?

Science update: What does the future hold for El Niño-Southern Oscillation and the Indian Ocean Dipole?

The Australian continent is uniquely located such that its climate is directly influenced by temperature fluctuations in both the Pacific and Indian Oceans. The Australian climate, and that of its neighbouring countries, are strongly influenced by processes like El Niño-Southern Oscillation (ENSO) and the Indian Ocean Dipole (IOD), which originate in the tropical Pacific and Indian Oceans respectively. El Niño years often result in drier conditions over eastern Australia whereas La Niña years generally bring increased rainfall over much of the country. When the IOD is in its positive phase, parts of Australia are generally drier and warmer and when it is in its negative phase, southern Australia experiences above average rainfall.

Over the last 60 years, the increased emissions of greenhouse gases due to human activity have led to changes in our climate. One question that has been puzzling climate scientists for decades is how ENSO and the IOD will respond to climate change in the future. Earth Systems and Climate Change researchers have been working to answer this exact question.

Projections of ENSO and IOD changes

Hub researchers under Project 2.2 analysed output from climate models around the world and showed for the first time that strong El Niño events, which warm the equatorial eastern Pacific, are projected to increase in amplitude and frequency under greenhouse warming. This projection means that in future, some Pacific Island nations are likely to experience more frequent floods (such as Kiribati and the Northern Cook Islands) while other Pacific Island nations and parts of Australia would experience more droughts (such as the Solomon Islands and eastern Australia). In a similar vein, analysis of climate model output showed that the frequency of extreme positive IOD events are projected to increase under greenhouse warming, leading to more occurrences of drought and bushfires over Indonesia and Australia.

This research has therefore produced valuable information for use by industries and natural resource managers when considering their climate risks in the future as greenhouse gas emissions continue to increase.

What will happen with 1.5°C of global warming?

These findings highlight the critical need to mitigate greenhouse gas emissions. The 2015 Paris Agreement aims to limit the rise of global mean temperature to 2°C above pre-industrial levels, with an aspirational target of 1.5°C, largely in response to concerns raised by vulnerable Pacific Island nations. The ratification of this agreement has raised important questions as to how climate extremes would change in a world that is 1.5°C warmer. Earth System and Climate Change Hub researchers investigated this question and found that the increased risk of extreme El Niño events continues for as long as a century after the global mean temperature stabilises. In contrast, the frequency of extreme positive IOD events stabilises with stabilised global mean temperature.

In other words, limiting the increase in global mean temperature to 1.5°C would eventually reduce the increased frequency of extreme El Niño events about a century after the global mean temperature stabilises. However, limiting global temperatures would have an immediate effect on halting the increased frequency of extreme positive IOD events. Publications on these results provided important inputs to the Intergovernmental Panel on Climate Change (IPCC) Special Report on 1.5°C Warming and the recent IPCC Special Report on Oceans and Cryosphere. The IPCC Special reports are used to inform governments around the world on the scientific evidence supporting the impacts of climate change on specific and relevant climate change topics. 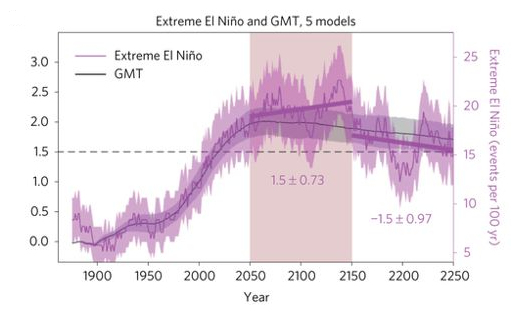 Extreme El Nino events are projected to occur more frequently up to 100 years after global mean temperatures stabilise at under 2°C warming The curves show the average of 5 climate models which have simulated the future global climate up to 2250 under a scenario in which global mean temperature stabilises at under 2°C warming around 2050. The black line shows the global mean temperature (averaged over 31-year sliding windows), while the thin wiggly purple line shows the number of extreme El Niño events per 100 years. The purple and grey shading shows the spread of the 5 models. The thick short purple lines and the numbers below them show the linear trend in number of extreme El Niño events between 2050–2150 and 2151–2250.

Due to the massive impact of extreme ENSO and IOD events and their projected increases, it is essential to improve simulation of these modes of variability in climate models, upon which these projections are based.

Climate models are not perfect, and a large source of uncertainty exists in future climate projections, primarily caused by model error. Therefore, the impacts of these model errors on climate change projections must be assessed.  When these errors were investigated, our researchers found that many models simulate winds over the tropical Indian Ocean which are too weak compared to observations. This error can lead to an underestimation in the projected response of the IOD to a warmer climate.

Another common error in climate models is a weak interaction between the tropical oceans. Some recent work led by Hub researchers found that the real-world tropics are a tightly interconnected system, with strong feedbacks from the Indian Ocean and the Atlantic Ocean onto the Pacific. Improving the simulation of these feedbacks in climate models provides a pathway forward for improving predictions of climate variability in the current climate, and for refining projections of future climate. These improvements will provide decision makers and managers with more accurate information about what our climate could look like in the future and therefore how best to prepare for this changing climate.

Science update: What does the future hold for El Niño-Southern Oscillation and the Indian Ocean Dipole? was last modified: September 11th, 2019 by Sonia Bluhm