Home News Science update: Australian Drought – How will it be impacted by El Niño-Southern Oscillation over the coming century?

Science update: Australian Drought – How will it be impacted by El Niño-Southern Oscillation over the coming century?

Drought can have severe and widespread impacts on Australia’s water availability, agriculture, ecosystems and communities. In Australia, drought is influenced by regional climate drivers, such as El Niño-Southern Oscillation (ENSO). ENSO has a profound impact on Australia’s climate and can modify risks associated with drought, flood and severe weather. ENSO and Australia’s climate are changing in response to human-induced increases in greenhouse gases.

Many factors including rainfall, temperature, and soil moisture can lead to drought conditions. Research conducted by the Earth Systems and Climate Change Hub on climate variability and extremes indicates that ENSO’s impact on rainfall in the Pacific and beyond is expected to increase in response to a warming world. Climate models also suggest that this intensification might already have occurred in the Pacific.

But what does this mean for Australia, and more specifically, for drought conditions over Australia?

To answer this question, Hub researchers examined the impact of global warming on the frequency of dry conditions over Australia and how ENSO and global warming combine and interact to cause the dry conditions. We focused on winter and spring rainfall as this is the growing season for important crops across the country, and it is also the season when water storages are filled in much of southern Australia.

We used climate models from the World Climate Research Program Coupled Model Intercomparison Project phase 5 (CMIP5) to analyse the interaction between ENSO and global warming for eight of Australia’s natural resource management (NRM) regions (see the Climate Change in Australia website for more information on these NRM regions). The CMIP5 model output include simulations of ‘preindustrial’ conditions (what the climate would look like if greenhouse gases remained at 1850 levels, before the Industrial Revolution), as well as ‘historical’ conditions (simulations of the climate from 1850-2005, including the influences from observed greenhouse gas emissions, as well as solar and volcanic activity). They also include projections over the 21st Century under a high emissions scenario (RPC8.5 – a future with little curbing of emissions).

In our analysis we defined ‘dry’ events as the driest 10% of winter-spring seasons under preindustrial conditions.  We then examined projected changes in the frequency of dry winter-spring seasons under historical conditions (1910-1989) and in response to large, future increases in greenhouse gas emissions (up to the year 2099). We also investigated the occurrence of consecutive and multi-year dry events.

After analysing all 24 models from CMIP5, we focused our attention on the five models that did the best job at simulating the impact of ENSO over Australia.

What did we find?

Most of Australia is projected to experience either a significant decrease or no change in average rainfall over the coming century if global greenhouse gas emissions are not reduced. However, we found that the frequency of ‘dry’ winter-spring seasons is projected to increase in all regions across Australia over the coming century. Generally drier conditions are projected to be infrequently punctuated by seasons that are just as wet or wetter than the wettest years experienced during the twentieth century.

Our projections show that the combined effect of changes in ENSO and background atmospheric warming on rainfall differs from region to region across Australia. For example, Australia’s Southern and South-Western Flatlands regions both show a decrease in rainfall during El Niño, La Niña and neutral years, whereas the Central Slopes region shows a decrease in rainfall mostly during El Niño and neutral years. The Monsoonal North, Wet Tropics and Southern Slopes regions are likely to experience an increase in ENSO driven rainfall variability. As a result, approximately 60% of future years are projected to be drought years in Perth, 35% in Adelaide, 30% in Melbourne, and approximately 20–25% of years in Sydney, Canberra and Brisbane. 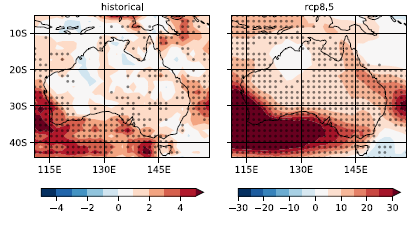 ‘Dry’ years projected to become more frequent into the future if greenhouse gases continue to rise. The current and projected impact of greenhouse gas emissions on `dry` years. A `dry` year is when the rainfall received is less than 10% of the Winter-Spring rainfall under preindustrial conditions. The left map shows the change in the percentage of `dry` years (between 1900-1989) compared to preindustrial conditions. The right map shows the same but projected into the future (2010-2099). Red colours show drier conditions and blue colours show wetter conditions. These maps are averaged over 24 CMIP5 models and are stippled where more than 70% of the models agree on the sign of the change.

The interaction between the climate system, greenhouse gas emissions and ENSO is complex and further research is needed to incorporate changes to temperature and soil moisture. However, these results highlight that if greenhouse gas emissions continue to increase into the future, we may experience more frequent and often more intense dry seasons and drought events in Australia. This will particularly impact our agriculture sector, especially as the main growing season for many crops important for Australia’s economy is likely to become drier over the coming century. Consecutive dry winter-spring seasons can also be damaging to ecosystems and impact water resource and bushfire management.

This research was conducted by Hub researchers François Delage, Scott Power and Christine Chung from the Bureau of Meteorology under Hub projects 2.2 and 5.2.

Science update: Australian Drought – How will it be impacted by El Niño-Southern Oscillation over the coming century? was last modified: June 5th, 2020 by Sonia Bluhm