Extreme climate events such as heatwaves, floods and droughts have huge impacts on Australia’s communities and natural and economic resources. Understanding what causes these extreme events is important for managers of a range of systems, such as ecosystems, urban planning and water resources, to allow them to better plan for and respond to current and future extreme events.

This is no easy task, as these events are often the result of complex interactions between various climate drivers. They can be triggered by a range of naturally-occurring climate variations such as El Niño–Southern Oscillation in the Pacific Ocean, or the Indian Ocean Dipole. In addition, the duration or intensity of an event can also be affected by human-caused climate change. The impact of these climate drivers and the interaction between them vary seasonally and geographically, so each extreme event must be studied individually.

Over the past three years researchers in the ESCC Hub Project 2.2 Enhancing Australia’s capacity to manage climate variability and climate extremes in a changing climate have been working on advancing the scientific field of ‘detection and attribution’ of these extreme climate events to determine the factors behind many events recently experienced in Australia.

Our global climate has always experienced natural variability, including slow temperature fluctuations which occur over several decades, or even hundreds of years. While the nature of this variability is the subject of much research, we know that the increase in global temperatures over the last 60 years is due to the increase in greenhouse gas concentrations in the atmosphere.

If the greenhouse gas-induced warming continues, can we expect extreme events to become increasingly frequent and severe?

The field of event attribution science can reveal the relative contribution from human-caused changes in the climate of a particular observed extreme climate event. It does this by identifying the climate drivers leading up to an observed extreme event and quantifying their respective contributions. Attribution studies can be successfully applied to events that are generally broad-scale in both space (e.g. all of NSW) and time (from a few weeks to a few months, with some success even at daily or multi-day scales although this is a lot harder).

Previous attribution studies have shown that abnormally high temperatures and associated extreme weather is indeed related to human activities. In Australia, human-caused climate change has been found to have substantially increased the likelihood of the record-breaking Australian summer of 2013, increasing the chances of the record hot summer by more than five times. Climate change has also been found to have at least doubled the likelihood of the northern Europe heatwave in 2018. 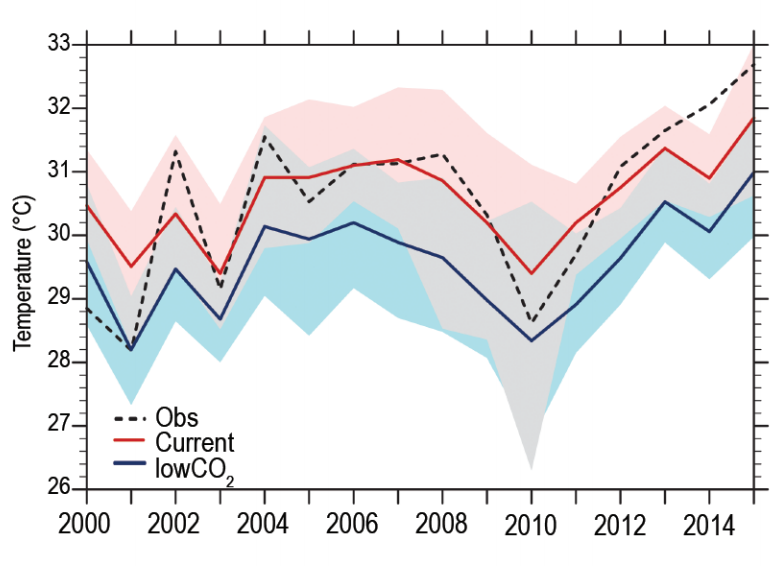 Australian average daily maximum temperatures averaged over October for each year between 2000 – 2015 would have been cooler (blue line) without increased greenhouse gas emissions
Observed, current and low CO2 October Tmax across Australia. The dotted line shows observations of maximum daily temperatures averaged over the month of October, for each year between 2000-2015. The solid red line shows the same quantity but calculated from the modelled forecast for current CO2 conditions. The solid blue line represents 1960’s (low CO2) conditions. The ensemble range of 11 members forecast from 1st October each year is shown in pink shading for current CO2 conditions and blue for low CO2 conditions.

The Earth Systems and Climate Change Hub is supporting the development and use of rigorous forms of event attribution methods that diagnose dynamical causes of an extreme event and allow us to better understand how and how much human-caused climate change contributes to an event. This gives us more confidence in the conclusions of the attribution studies, than previous more simplistic methods.

Various modelling systems can be used to tease out the drivers of extremes. The ESCC Hub Project 2.2 has contributed to studies that used three different sets of models or model systems: the CMIP5 set of global climate models; the weather@home regional modelling system for Australia run from Oxford; and the POAMA sub-seasonal to seasonal (S2S) prediction model run in ‘attribution mode’. More information about these models/model systems can be found here:

The Hub is also supporting the development of an attribution system to be used operationally. Making attribution analysis operational means that we can get access to information about what has caused an extreme event much quicker.  For instance, running the Bureau of Meteorology’s POAMA S2S prediction model in attribution mode operationally can allow attribution statements to be made before an extreme event even occurs. Using this method, two sets of forecasts for an extreme event are generated: one set of forecasts with the current level of carbon dioxide (CO2) concentration and high-quality observed atmosphere, land and ocean conditions and the other set of forecasts with 1960’s level of CO2 concentration and cooler atmosphere, land and ocean conditions (to reflect conditions in the 1960’s). A comparison between the two forecasts reveals a possible contribution of human-induced climate change since 1960 to the event.

Research under Project 2.2. over the past three years has shown that long-term changes in ocean temperatures caused by increasing greenhouse gases make a significant contribution to extreme temperatures and rainfall in spring months in Australia.

During the record heat of October 2015 across most of Australia, half of the excess heat was caused by the increase of CO2 emissions, while the other half was caused by contributions from ENSO, the Indian Ocean Dipole and anomalous atmospheric circulations. In Tasmania there was a small but significant signature of climate change in the record dry experienced in October 2015. 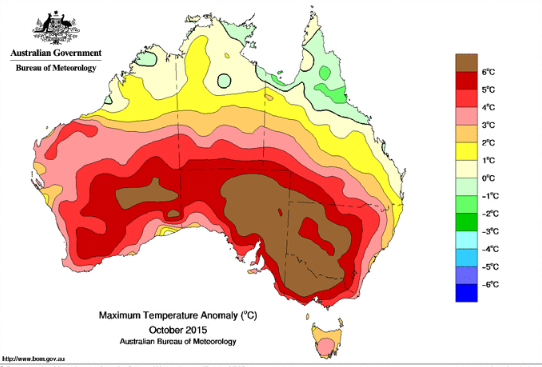 Climate change also appears to have partly contributed to the extreme fire weather experienced across central eastern Australia in February 2017 by promoting high temperatures. On the other hand, the record-high September rainfall over south eastern Australia in 2016 was largely driven by the record strong negative Indian Ocean Dipole and a weak La Niña, and there was no direct impact of human-caused climate change on the event.

Recent research has also shown that the increased length and intensity of periods of elevated sea surface temperature, known as marine heatwaves, also show a clear human fingerprint. Project 2.2 has contributed towards a collaborative study of the 2017/18 Tasman Sea marine heatwave, which had large impacts on local ecosystems and fishery and aquaculture industries. The study showed that human caused climate change significantly contributed towards this extreme event.

Our research and research across Australia and internationally show that as greenhouse gas emissions increase, extremes are projected to increase as well. Therefore, understanding how climate change contributes to past and near future extreme events will provide valuable information for governments and industries in planning and preparing for these events.

Research into the attribution of  extreme climate events will continue under the Hub’s Project 5.2 Understanding climate variability and change – past, present and future.