Home News Something in the air: how determining the composition of the Southern Ocean atmosphere will give us better climate projections

Something in the air: how determining the composition of the Southern Ocean atmosphere will give us better climate projections

Climate models are the best tools we have for planning ahead in a changing climate. Based on fundamental laws of physics, the models simulate the atmospheric, ocean, land surface and ice processes that combine to determine the climate.

Climate models are tested using data from climate observations. Models that reproduce observed conditions and past climate changes well are likely to simulate more realistic projections of future climate than those that don’t. However, all models have strengths and weaknesses – regions and conditions they simulate well, and others that do not quite match observations. When a climate model consistently over or underrepresents particular conditions, it is called a bias. Biases occur when the representation of a physical or chemical process is incomplete, often due to limited observations of those processes in the vast and complex climate system.

The errors in the radiation budget are thought to be because of the representation of aerosol and clouds in the Southern Ocean. We have a limited understanding of aerosol and cloud processes in the region due to a dearth of observations – the Southern Ocean is a difficult place to get to and conduct field experiments in! This is compounded by the absence of long-term records of aerosol in the region – with no land, there are no permanent monitoring sites.

Finding out about Southern Ocean aerosol and clouds

The Southern Ocean atmosphere is near-pristine, and studying it gives insight into what a pre-industrial atmosphere looked like. Acknowledging the importance of the Southern Ocean, and therefore the significance of the warm bias, concerted international efforts are now being made to better understand aerosol, clouds and radiation in the region. In fact, three programs are underway right now.

Last month, the RV Investigator set off on the CAPRICORN voyage to sample aerosol and clouds over the Southern Ocean. CAPRICORN (Clouds, Aerosols, Precipitation, Radiation, and atmospheric Composition Over the southeRn oceaN) is a major Australian field campaign and part of a larger international effort called SOCRATES (Southern Ocean Clouds, Radiation, Aerosol Transport Experimental Study). As well as ground-based elements, SOCRATES is conducting flights from Hobart out over the Southern Ocean in the US HIAPER research aircraft to collect data. The third program has seen the icebreaker Aurora Australis outfitted with US Atmospheric Radiation Measurement (ARM) facilities to measure aerosol, clouds and radiation while the ship is underway on resupply voyages to Antarctic research stations. 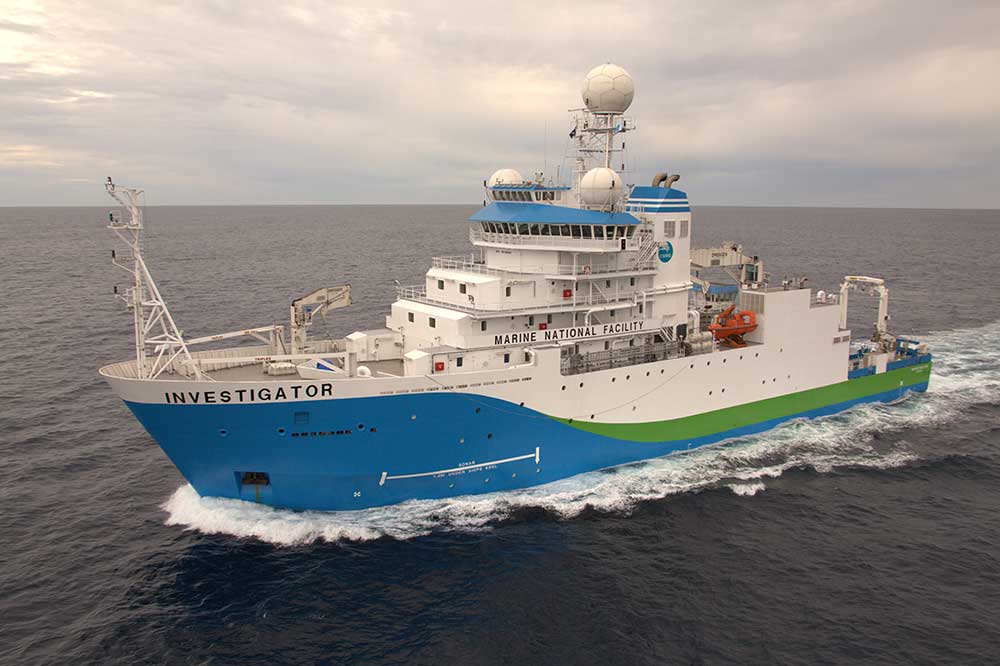 The RV Investigator is currently collecting cloud and aerosol information in the Southern Ocean (Source: scienceimage.csiro.au)

The outcome of all this activity will be a vastly increased understanding of the Southern Ocean atmosphere. The data derived from these field campaigns will benefit climate models in two ways:

It’s an exciting time to be involved in Southern Ocean science – the RV Investigator is permanently equipped with instruments to sample aerosol, so every time the ship sails south, it adds to the thin set of observations we currently have. On top of that are intensive campaigns like SOCRATES and CAPRICORN. The next couple of years will be full of new insights into the atmosphere in the Southern Ocean as all the data is collected and analysed.

In the meantime, Hub researchers are making use of existing observations, like those from the Cape Grim Baseline Air Pollution Station in Tasmania, to evaluate and improve the ACCESS climate model.

Matt Woodhouse is a researcher in Hub Project 2.1 and Project 2.5 working on improving the representation of aerosol in ACCESS.

Something in the air: how determining the composition of the Southern Ocean atmosphere will give us better climate projections was last modified: February 3rd, 2018 by Karen Pearce